Register Yourself Register Two or More
View Event Attendees
The WLI Leadership Series features women of influence who have demonstrated leadership and expertise in real estate development, land use, city building and their community. The programs are intended to inspire and provide empowerment to women in pivotal stages of their careers to Increase the number of women in leadership positions.
In this series focusing on Native American women leading development, Kari McCormick, of Native owned Wenaha Group, will interview the Honorable Bernadine Burnette, President of Fort McDowell Yavapai Nation.
President Burnette was recently named one of the Most Influential Women in Arizona Business and currently serves as President of the Inter-Tribal Council of Arizona (ITCA), Vice President of the Inter-Tribal Association of Arizona (ITAA), and has held positions as President and Vice President of the Arizona Indian Gaming Association and Secretary of the National Indian Gaming Association. Her current and past memberships also include the National Congress of American Indians, the National Tribal Environmental Council, the National Indian Education Association, and the Maricopa Association of Governments Regional Council.
We look forward to hearing President Burnette’s perspectives on leadership, working in Indian Country, vision for the Fort McDowell Yavapai Nation and Indian Nation Country as well as her many stories of growing up in Arizona. Kari McCormick will also weave in extensive knowledge and insights from 20 years working in Indian Country, as well as a live feed from the all new We-Ko-Pa Casino Resort.Please join us in highlighting, promoting, and celebrating dynamic women who are leading the industry both locally and globally and working to make it easier for women to be at the table.
Thank You to our WLI Leadership Series Sponsor 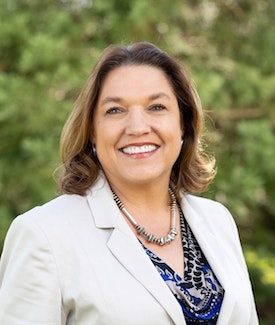 Kari is responsible for new client development, maintaining client satisfaction throughout the life of a project, while assuring cultural competencies and compliance with our clients. Nearly twenty years working in Indian Country she is committed to advancing the lives of Native peoples through economic and community development. Her respect for learning about each unique Tribal culture, honoring the traditions and history of Indigenous Nations and helping the construction and design industry find a common language to bring progressive and meaningful development to Indian Country is her passion. Wenaha Group, Native Owned, is an Owner's Representative, Construction Management & Consulting Firm that specializes in education, tribal, gaming/hospitality, public agency, housing and healthcare projects. Celebrating 10 years and over 30 employees, Wenaha Group manages projects from $2M to over $400M serving clients and their communities in Arizona, California, Oregon and Washington.
View in Member Directory Will open in a new window A descendent of the late Carlos “Wassaja” Montezuma and the late granddaughter of Margaret Dickens, Bernadine Burnette has led the Fort McDowell Yavapai Nation for more than two decades – during which time she has held the position of Secretary, Vice President and, most recently, President (Burnette was re-elected to this office in 2020). Leveraging her work experience for four decades, her hard work and dedication have resulted in substantial tribal economic growth. This includes opening the new We-Ko-Pa Casino Resort; establishing a definite place in Tribal, County, State and Federal government; and continuing much-needed services and programs for Tribal Members. Recently named one of the Most Influential Women in Arizona Business, Burnette also currently serves as President of the Inter Tribal Council of Arizona (ITCA) and Vice President of the Inter Tribal Association of Arizona (ITAA), and has held previous positions as President and Vice President of the Arizona Indian Gaming Association and Secretary of the National Indian Gaming Association. Her current and past memberships also include the National Congress of American Indians, the National Tribal Environmental Council, the National Indian Education Association, and the Maricopa Association of Governments Regional Council. A firm believer that family is the foundation of every community, Burnette is proudly married to Wayland Burnette and has a son, daughter, niece, three grandchildren and many relatives. Her ongoing commitment to the Fort McDowell Yavapai Nation is to Work with The People and For the People.
View in Member Directory Will open in a new window